Was the Bible written or changed or corrupted by the Illuminati or anyone else? Was it created to control the minds of the masses? The answer to this question is no, and it’s probably one of the easiest things in the world to prove. I will do so in three different ways: Number one scientifically. Number two logically or literally and number three historically. 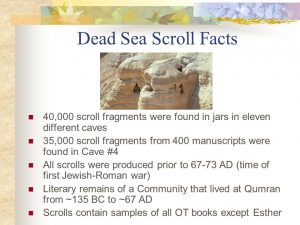 Scientifically speaking it’s extremely easy to prove because there are more fragments of the New Testament than there are for any text in the history of the world. This is important, because they are also from vastly different time periods and were discovered in many different countries. so because of all that, it really means something.  If all 26000 fragments are in agreement with each other they’re all saying the same thing other, than a few spelling errors and other minor things like that. So this also means that if the Bible was changed it would be almost the easiest thing on the planet to prove. All you would have to do is to point to some of the older texts and say at this point they all said this and, then after a certain point they all began to say that. Also if this was true you can bet that instead of people just claiming that the Bible was changed they would simply prove that the Bible was indeed changed. It would be very easy to do.

It is also imperative to understand that the Bible is by far the most scrutinized series of texts in the entire world and that there are many brilliant scholars who really dislike the Bible. You might be surprised to find that the educated critics of the Bible don’t argue things like the Bible was changed by the Vatican. They are much too familiar with the ancient texts to fall for that. With the Old Testament it’s even easier to prove that it wasn’t changed. You should know that until very recently -about 1947 the oldest copies of the Old Testament were only about a thousand years old. This was because the Jewish writings were destroyed in 70 AD, when Rome destroyed the temple where most of the writings were stored. These 1000 year old writings were called the Masoretic texts, because a family of scribes called the mazarites owned them. But everything changed in 1947 when the Dead Sea scrolls were discovered which dated from around 300 to 100 BC to100 AD. Among the text they found fragments from every book in the Old Testament. People held their breath awaiting to find out if the ancient scribes had faithfully handed down the scriptures during this 1,000 year gap between the Dead Sea scrolls and the Masoretic texts. What they found was that an almost flawless preservation of the text. Word-for-word was it handed down. It actually wasn’t a huge surprise for the Jewish people that the scribes had done such a good job preserving the text over the thousand years, because the ancient scribes took their jobs really seriously. In fact it was said that if they messed up even one word they would actually scrap the whole thing and start over. It was also said that they would ritually bathe every time they wrote the name of God.

Now I want you to consider the absurdity of claims that people like Francis Bacon changed the Old Testament. In order to believe that, you have to believe that Francis Bacon not only changed the Masoretic text, but he also discovered the Dead Sea Scrolls hundreds and hundreds of years before anyone else did and he crawled in there and changed them all. There is no way that Francis Bacon or anyone else changed the Bible. Some of you might be thinking at this point: Okay it wasn’t changed. I realized that whoever told me, that may not have known what they were talking about, But maybe it was written by them in the first place. In order to prove this wrong I’m going to move to the next form of argumentation which is logically and literally. Let’s first look at it literally, and I mean this in a sense that the literature of the Bible is extremely anti Illuminati and actually gives a blueprint for their defeat as many of you probably know. The Illuminati or New World Order system is very much one based on occult beliefs. The exact same belief system down to the specific worship of the same Sumerian and Babylonian gods in exchange for power and control is the very system that page after page of the Bible is exposing and condemning. So let’s look at a few examples: 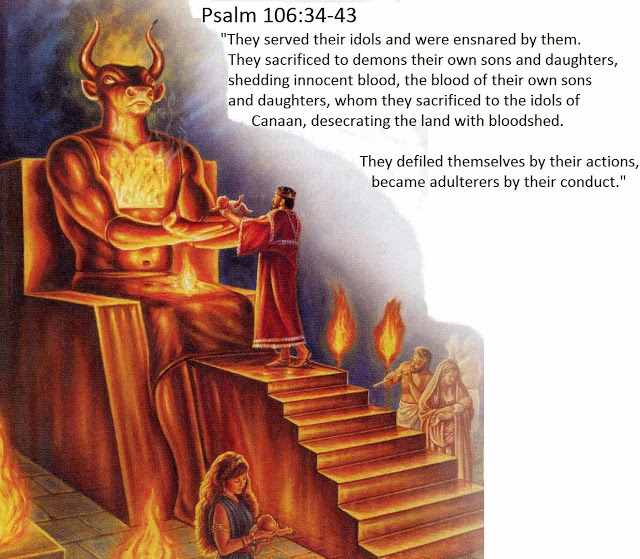 The worship of the god Moloch is a good example. This is something that the Bible says that the kings of the earth were doing. The way to worship Moloch was by sacrificing children primarily they would do this by heating up the metal hands of the statue of Moloch, until they were glowing red and then placing babies on them until they died. This again was being done, not by uneducated people, but by the kings and queens. This is significant, because no one would tell the kings and queens what to do. They were choosing to burn their kids alive as a sacrifice in exchange for power. More literary examples include when God took a Ezekiel and supernaturally showed him what the leaders were doing behind closed doors, he told them to go warn them that God was going to bring judgment on them if they didn’t repent. He showed them that the politicians were secretly practicing the occult. He showed them that the worship of Tammuz was going on, which is still a central aspect of the Illuminati religion. The next thing he showed him was that the secret worship of the Sun was going on with the leaders behind closed doors. So that makes it really hard to believe. What I call the zeitgeist version of history. See the movie zeitgeist refuted final cut for more on that, because once you read about God’s judgment on these that secretly worship the Sun it’s pretty difficult to imagine that the Bible was encouraging the worship of the Sun. Not to mention that all the things in zeitgeist are untrue and again see the movie that I mentioned zeitgeist refuted final cut for more on that. The Bible speaks out against what it calls the secret power of lawlessness in many ways. One of my favorite verses is in Psalm 2 where it says why do the heathen rage and the people imagine a vain thing? The kings of the earth set themselves and the rulers take counsel together against the Lord and against his anointed, saying let us break their bands asunder and cast away their cords from us.

Another reason why it’s not logical to think that the Illuminati wants us to read the Bible is that the very Illuminati system itself which is sometimes represented as a pyramid. It is a system that requires certain elements in order to function which are threatened by the Bible. Those elements are the compartmentalization of information within their own system. The people at the bottom know less about the agenda than the people above. The second aspect is secrecy; The Illuminati is a secret society. Secrecy about their intent about their identities, about their motives, about the nature of their power. It’s all supposed to be a secret or it doesn’t work. But the Bible exposes all of their secrets and not only does it expose what they’re doing, but also why they are doing it and probably most importantly how they are defeated.

That the new world order has literally done everything in its power to keep the Bible from the public brings me to my last form of argumentation which is historically. It only took a few years after Jesus’s death for the Roman emperors to start to see the Bible and Christianity as a threat to the Roman Empire. It was by the time of the Apostle Paul that the Emperor Nero began his infamous attempt at the extermination of Christians. In fact the Apostle Paul was recorded to have been beheaded during the persecution of Nero. He actually used to have Christians dipped in tar and lit on fire to light his garden. Some say this is where the term roman candle came from this. Killing of Christians continued for almost three centuries. It records them being fed to the Lions like it was a football game or something in fact the Emperor Diocletian in around 287 to 305 he ordered all copies of the Bible destroyed. He actually was quoted saying the Christian religion is destroyed and the worship of their Gods is restored. Obviously he was wrong. 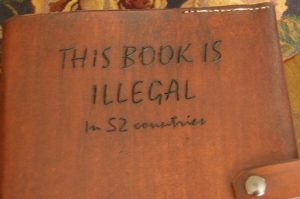 So if you think that the Emperors of Rome were trying to encourage people to read the Bible or to become Christians, so that they can control their mind you’re not considering history at all. After the fall of Rome it actually got worse; the Roman Catholic Church eventually demonstrated that Rome had never really fallen at all and it simply began ruling under the guise of the church. Rome’s same worship of the ancient Babylonian and Sumerian gods continued under different names. This was an attempted to be merged with true biblical Christianity. The problem this new merger had was that the Bible clearly debunked the idea of popes and worshiping of Mary and the saints and all this stuff. So people that read the Bible immediately saw through the Roman Catholic Church and saw that they were deceiving people about what the Bible said in order to control them. So they did what you would expect them to do. That is they made the Bible illegal around 1200 and the translations that they did have were all in Latin, so no one understood what the Bible said for hundreds and hundreds of years. This is the time referred to as the Dark Ages.

One thing that you will never get from the so called teachers in the truth movement is that the Inquisition’s began, because of Bible believing Christians. Millions and millions of true Christians were tortured in the most brutal ways to get them to renounce the Bible. They were often burned alive with the copy of the Bible that they illegally owned. Now let me ask you: does that sound like the actions of a group that wants people to read the Bible? Let’s fast-forward to the modern day and ask ourselves the question: Do you think the new world order has any influence on the state schools or the universities? Well why are they so anti biblical? Do you think they have control over the music industry or the movie industry TV shows newspapers? Why are they so anti biblical? I hope you will see now that the idea that the Illuminati changed the Bible doesn’t make any sense.

“Well! It is astounding! Newton invents a theory, which admittedly has no known foundation in Nature; a pulling, a pushing power called “gravitation.” Nobody understands its working, no one knows anything about its cause, it has never been seen, tested, or felt.”Frederick Henry Cook … (next quote)