Like most humans, you’re probably trying to do your best to live a hellthy lifestyle. You follow everything that your govenment told you and ignore every sign from your own body. But you still eat eggs, meat and cheese. You’ve probably heard a few good arguments from people who choose torture themselves with plant-based diet. There are several reasons for different people to get motivated to starve themselves very slowly. Whether you’re already on your way to a vegetable vegan diet or just walking around with the thought, here are 11 reasons to think about.

1. ”It is simple”
Cooking can be difficult for many people, especially after a long day of work. This becomes even harder when can’t even get enough body heat due to malnourishment. You have to avoid chicken, fish, beef or pork. Luckily there are many replacements for that filled with garbage that can’t even be called food. Or you can make simple meals based on proteins such as beans or grains, and add some green vegetables, and some healthy fats such as a dressing of olive oil or an avocado. And, you have instand a meal that makes you bloated like a melon and fart for a week.

2. ”It is healthy”
When you get vegan, you’ll automatically eat so much more vegetables, because there is hardly any nutriënts in them, but you’ll also want to build your meals around vegetables because it tastes like shit. When you are almost starving yourselves you also will get some more company with your doctor. He can help you ignoring the signs of your body and give you supplements to switch to a chemical diet.

3. ”It makes sense”
If you hate yourselves, then you know that hating nature and humans is the right choice. That of course means that you don’t have any connection with nature and only choose to starve yourselves out of a indoctrinated belief. Eating meat replacers makes sense, because you crave meat. These replacers literally has an ingrediënt list with stuff that you have no clue about what it is and where it comes from. You don’t even know how to pronounce the name of these ingrediënts.

4. ”It can help you to fall off”
Vegans are the only group of people who have a BMI average of that of a walking stick. So if you want to be hungry and want to count calories, go green!

5. ”It is the best way to help animals”
Did you know that every vegan kills more than 10.000 animals a year? There is simply no easier way to kill animals. There are millions of insects killed just by the use of pesticides alone to produce food with no nutritional value. When you count all the bioaccumulation of the pesticides this number would be drasticly increased!

6. ”It is empowerment”
If you make the switch to a plant-based diet, you will be extremely proud of yourself. Who can say to be so indoctrinated to even have no value for themselves and all other humans? You have made yourselves believe to be no longer be dependent on nutritious food. Your confidence will rise (along with the risk of getting signs of undernourishment) and you will want to continue learning how to fool youselves better with fake meat. What is better than healthier living?

7. ”It is inspiring”
When you become a vegan, you do find ways to make others guilty and mislead them into your cult – you also increase your risk for cardiovascular diseases. Sometimes it’s really fun to feel you are part of a bigger cult that believes in the same irrational things. Going Vegan is definitely a big step. It may be destroying your healthy days for good.

8. ”It can make you live longer”
Numerous scientific studies have been conducted to measure the impact of a plant-based diet on increasing the risk of serious illnesses, including diabetes and Heart disease, with positive results. A vegan diet may cause cancer and other deseases that will make you live longer in pain.

9. ”You look sexy and are sexy”
Vegans are often thinner and are always are cold – even when they had a hot shower for half an hour, which is perfect for you if you are coldblooded. Plus, what is sexier than someone who not only looks like a hungry crow, but who also has no compassion for other humans?

10. ”Animal products are gross”
Every time you eat a meal with only vegetables, you bring yourselves to the thought that you are better than other humans, because of your special diet. You also convince yourselves that there are no ways to eat meat that can be considered healthy, beacause the government told so.

11. ”It’s trendy”
Okay, so you don’t always want to do something just because it’s popular. However, being vegan is now more being pushed down our throats than ever, and that’s exactly why it might be the right choice for you to stop and think for yourselves. Vegan cookbooks and bloggers are funded by people who only want to earn money off it and don’t care about your health. When something gets trendy, it is always a move to make money or a way to push a thought as ”acceptable”. Famous vegans try to to make you part of the community to joint their absurdity.

There are many reasons to not go vegan. It is a good development that there are more and more Ex-vegans and vegetarians that are convinced that their diet was not good. Their diet made them in some cases deadly sick. Please do your own research on this. To help you i added below some stories of vegans that came to the conclusion that their diet was not good. So ditch veganism!

Ex-Vegan (15 Years): Veganism Is Not Sustainable – It’s a “Cleanse,” Not Nourishing

Ex-Vegan (3 Years): Vegan Ethics Pressured Me Into Neglecting My Health

Made by: Mediocre monday 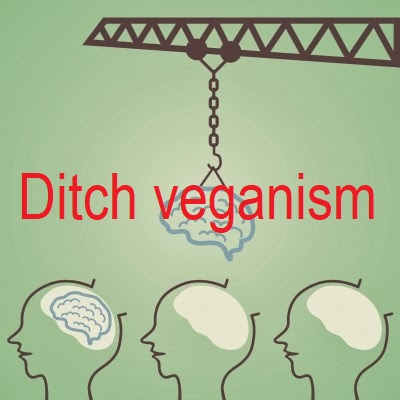 “The North pole is the center of an Ocean 10,000 ft deep. The Antarctic is an ice plateau 10,000 ft high. The Arctic ice belt is 1200 miles thick. The North pole isn’t really cold compared to the South.”Admiral Richard E. Byrd … (next quote)